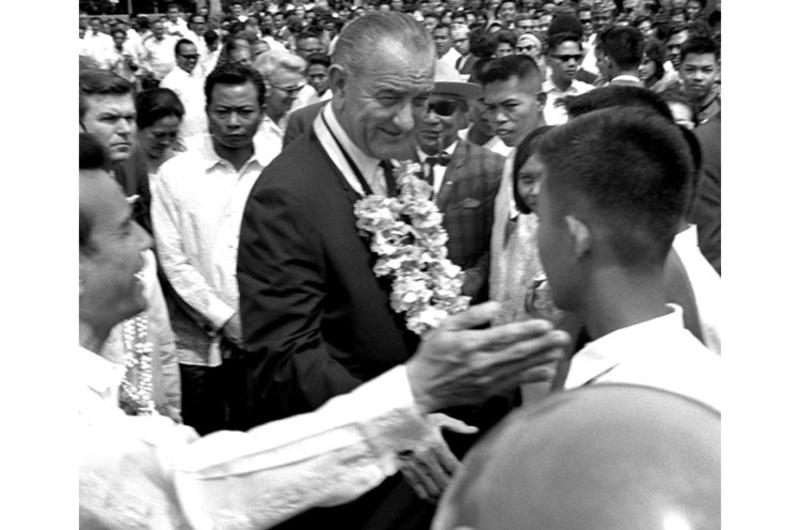 President Johnson mingles with the crowd during the Manila Summit.

MANILA — The city was set for an enthusiastic welcome Sunday for President Johnson and five other chiefs of state arriving for a 7-nation summit conference.

Prime Minister Nguyen Cao Ky of the Republic of Vietnam was to be the first to arrive. His arrival was to be followed at 15-minute or half-hour intervals by the other leaders.

Johnson, coming from Australia about 3 p.m., was to follow President Chung Hee Park of the Republic of Korea and precede Prime Minister Harold Holt of Australia. Prime Minister Keith Holyoake, of New Zealand, and Prime Minister Thanom Kittikachorn of Thailand, were to arrive last.

President and Mrs. Ferdinand E. Marcos were to greet each chief of state at the airport. Other Philippine officials participating in the airport welcoming ceremonies include Narciso Ramos, Philippine secretary of foreign affairs, and Ambassador Alberto Katigbak, chief of protocol. Philippine cabinet, congressional members and supreme court justices also were to participate in the ceremonies.

Each head of state was to receive full military honors, including a 21-gun salute, the playing of the national anthem and a salute from a composite battalion of the Philippine armed forces.

Approximately 280 newsreel and television cameramen and other photographers, besides 125 reporters have been accredited to cover the arrival of Johnson and other summit chiefs.

From the airport, Johnson was to go directly to Luneta Park in the Bayshore area to place a floral offering on a monument to Jose Rizal, national hero of the Philippines.

The Johnsons will stay at the Manila Hotel, which has been reserved for the summit chiefs and members of their parties.

Secretary of State Dean Rusk, who arrived Friday, spent part of Saturday conferring with Ramos and other Philippine officials. He was accompanied by William Bundy, assistant secretary of state and Ambassador William McCormick Blair Jr.

Later, Rusk was host to a luncheon for Vietnam Foreign Minister Tran Van Do at Blair's home. Ambassador Henry Cabot Lodge was among luncheon guests.

Monday, the chief delegates are to hold opening ceremonies at the Philippine Congress Building. Then they will go to Malacanang Palace to begin their formal conferences.