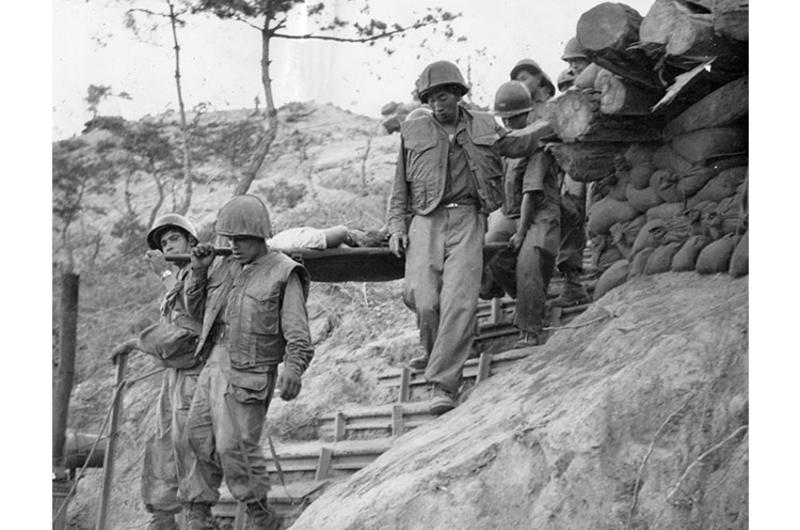 A wounded "buddy" is carefully carried down the ragged hill on his way to the rear for medical care.

By Walter Cord | Stars and Stripes

Men of the Colombian Battalion - most probably 3rd Platoon, Company A of the 1st Colombian Infantry Battalion - and their South Korean Army counterparts carry one of their wounded men down Hill 400 after the conclusion of a successful raid on the hill. Lasting only an hour and 30 minutes the Colombians killed 28 enemy soldiers, destroyed its artillery positions and took the hill.

The platoon suffered 2 KIA and 15 wounded. By the time the Colombian Battalion returned home on October 29, 1954, one hundred thirty-one of its servicemembers had died in combat, ten in wartime accidents, two of natural causes and more than 400 were wounded. But the Colombians also received twenty-five Bronze Stars with Valor, nine Bronze Stars, eighteen Silver Stars, and two Presidential Unit Citations (one from the United States and one from South Korea).

Colombia was the only Latin American country to dispatch troops to Korea during the Korean War - the 1st Colombian Infantry Battalion, which became known as the Colombian Battalion, arrived in country June 15, 1951 and during their deployment were attached to several U.S. Army Infantry Regiments.