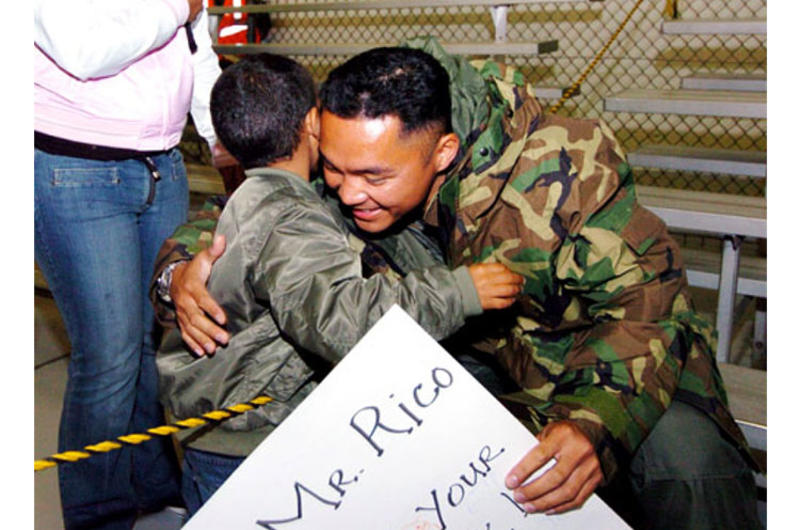 Around 80 servicemembers returned home to Yokota Air Base, Japan, on Friday after completing their role in Operation Unified Assistance.

YOKOTA AIR BASE, Japan — Roughly half of Yokota’s force commitment to Operation Unified Assistance, the U.S. military’s tsunami-relief campaign in South Asia, is back home.

Four C-130s assigned to the 374th Airlift Wing — carrying about 80 troops total — returned Friday. A day earlier, another 50 airmen arrived from Utapao, Thailand, where they helped form the 374th Air Expeditionary Wing and established a regional distribution hub for humanitarian-assistance missions immediately after the Dec. 26 catastrophe that has claimed more than 140,000 lives across South Asia.

About 120 airmen and four C-130s from Yokota remain in the region. Base officials said it’s unclear how long they’ll stay.

“Our people did an incredible job,” said Col. Mark Schissler, who stepped off one of the C-130s Friday afternoon after serving as the air expeditionary wing’s commander.

“We flew every day we were there. The airplanes, these 40-year-old flying machines, performed magnificently. And the crews figured out how to get in and out of some pretty tough airfields. They did everything safely, and we got things going within the first couple of days.”

The airmen — representing the maintenance, medical, civil engineering and communications fields — were dispatched to various locations during the monthlong deployment, including Colombo, Sri Lanka; Banda Aceh, Indonesia; and Phuket, Thailand.

Most appeared groggy Friday after a grueling nine-hour flight from Utapao, but satisfied with what they had accomplished.

“We were set up and online in about one-sixteenth the time it normally takes,” said Chief Master Sgt. Kevin Van Gordon, who was maintenance chief for the 36th Expeditionary Airlift Squadron in Utapao. “We were set up and flying within 10 hours. This is what we do. It’s why we exist, and there was a mission to be done.

“We’ve exercised with the Thai and Australian militaries before, but never been in a humanitarian-type situation. The relationship we had between ourselves and the Thais, zero glitches. It was smooth.”

Schissler, who got panoramic views of the tsunami-ravaged areas from above, said the utter destruction wrought by the walls of water that crashed into coastlines was almost unimaginable. In Banda Aceh, he saw towns where “90 percent of the people had died.”

“It really sunk in before I got back,” he said. “The devastation was severe, almost too hard to describe. Miles of coastline were destroyed from the sea inland. Up to about three miles, everything that existed was gone. That meant all of the people in that area perished, too.

“The earthquake and tsunami destroyed everything. It was very hard to look at.”

U.N. relief agencies are distributing the bulk of humanitarian relief supplies as the U.S. military scales back its operations, Schissler said.

“It will take years for them to recover,” he said. “Our part was to cover the emergency. The crisis is abated. We made a difference.”