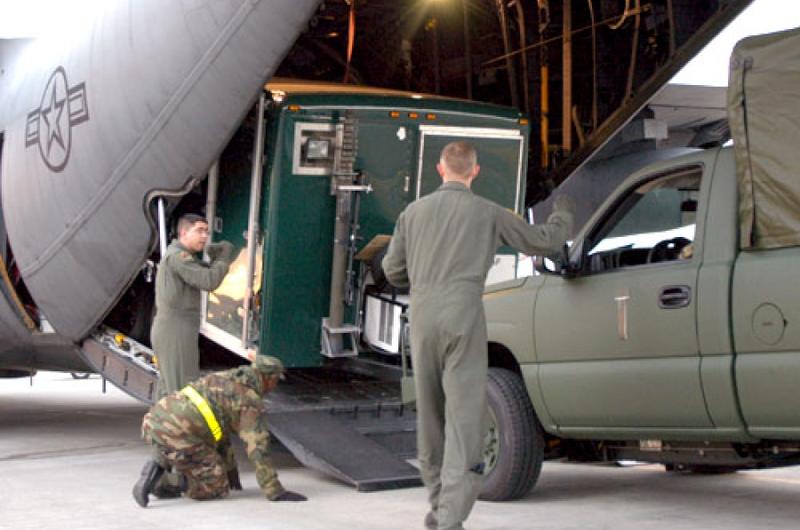 Personnel from Yokota 36th Airlift Squadron load a mobile command post into a C-130 Tuesday afternoon. The plane was bound for Utaphao, Thailand, where crews will use a forward-operating base as a staging area for relief supplies being sent to tsunami- and earthquake-ravaged areas of Southeast Asia.

U.S. military officials in the Pacific are cranking up humanitarian-assistance and disaster-relief missions to Southeast Asia after a powerful earthquake triggered a catastrophic tsunami along the coastlines of Thailand, Sri Lanka, Indonesia, India and other nations Sunday.

Lt. Col. Bill Bigelow, a Pacific Command spokesman, said military resources in Japan, Guam and elsewhere in the region will be tapped in the relief effort.

Air Force and Navy officials in Japan dispatched aircraft and ships to the area on Tuesday, with personnel moving into forward-operating locations that will be used as staging platforms for the delivery of supplies such as temporary shelter, clothing, food and water.

Marine officials on Okinawa were unsure whether they’d launch a humanitarian-assistance mission to Thailand, similar to the one recently conducted in the Philippines. Kadena Air Base had tankers and medical-evacuation teams standing by, but Air Force officials there had not received a specific tasking Tuesday.

“We’re just getting stuff on the ground,” Bigelow said. “We continue to plan for the relief effort.”

At least 52,000 people in 11 countries were killed in the weekend devastation. The 9.0-magnitude earthquake beneath the Indian Ocean off Indonesia was the most powerful to strike the planet in four decades.

PACOM officials sent three P-3 Orion aircraft to Utaphao, Thailand, on Tuesday to conduct search-and-rescue surveillance, while the Navy has deployed three others from Kadena to assist in that endeavor.

“The P-3 Orion aircraft’s long range and long loiter time capability is an invaluable asset for search-and-rescue operations as it can view the battle space and rapidly provide that information to regional Rescue Coordination Centers,” said Lt. Arwen Consaul, a Commander, Naval Forces Marianas spokeswoman on Guam. “While not able to physically rescue a survivor from the water, the P-3’s communications suite and abilities to stay on station, survey for long periods of time and deploy life rafts in the vicinity of any survivors make it an important component of any search-and-rescue operation.”

C-130 cargo planes left Yokota Air Base, Japan, on Tuesday to deliver equipment and supplies to Utaphao, where crews are setting up a larger presence at the tiny forward-operating base. Once the mission-support package is in place, aircraft will conduct more targeted disaster-relief operations in the region, said 1st Lt. Warren Comer, a 374th Airlift Wing spokesman.

Additional military supplies were being picked up at Kadena, Comer said.

Tech. Sgt. Paul O’Daniel is a mission support team chief for the Tanker Airlift Control Element of the 613th Contingency Response Group’s Detachment 1 at Yokota. But Tuesday, he was part of a C-130 crew preparing to deliver a mobile command post to Thailand.

“When we get down there, we’ll have all our communications capabilities set up. That includes air-to-ground radios and satellite communications,” O’Daniel said. “We’ll be the focal point for all cargo coming in and going out of the airfield. We’re the command-and-control portion. We’ll talk to the airplanes and find out what they have coming in.”

Officials are discussing the possibility of establishing another forward-operating base in Sri Lanka to assist in the relief efforts, he added.

The response time for Tuesday’s mission was far shorter than usual, O’Daniel indicated. He said his team normally gets a 12-hour window, but this week, prep time was cut to nine.

“It’s significant going out and doing relief missions,” he said. “Performing humanitarian relief is so much different than going out for a routine exercise or flight. You get a better sense of pride knowing you’re helping other people. It’s a great job, a rewarding job. I love doing this.”

Plans for handling donations from individuals have not been arranged, Comer said.

“We’re just taking care of the U.S. government-provided support right now,” he said. “I understand people really want to help out. If they want to assist, the best thing for them to do is contact the local Red Cross or some sort of support agency. The Air Force doesn’t have a lot of that set up right now to get regular people involved.”

Seventh Fleet units also are assisting in the relief efforts. Ships of the USS Abraham Lincoln Carrier Strike Group, along with those from Expeditionary Strike Group 5, have been diverted to the affected areas to conduct humanitarian relief operations.

The USS Bonhomme Richard, an amphibious-assault ship assigned to San Diego but on a six-month deployment in support of the war on terror, has shortened its stay on Guam while the USS Duluth and USS Rushmore are bypassing the island completely to join the Southeast Asia effort.

The three Expeditionary Strike Group 5 ships are well-equipped for humanitarian assistance and disaster relief, officials say. Each has extensive medical facilities on board, as well as capacity to transport supplies. They had been expected to stay on Guam until Sunday.

PACOM also is sending three assessment teams of about a dozen mostly military personnel to determine what further aid the military could supply.

“Those teams assess how best and where best our assets can be utilized,” Bigelow said.

Pacific units have the capabilities to provide engineering, transportation assistance, medical aid and water. The Defense Department also is looking at working with other government and nongovernmental agencies, and other nations in the region, on cooperative relief efforts.