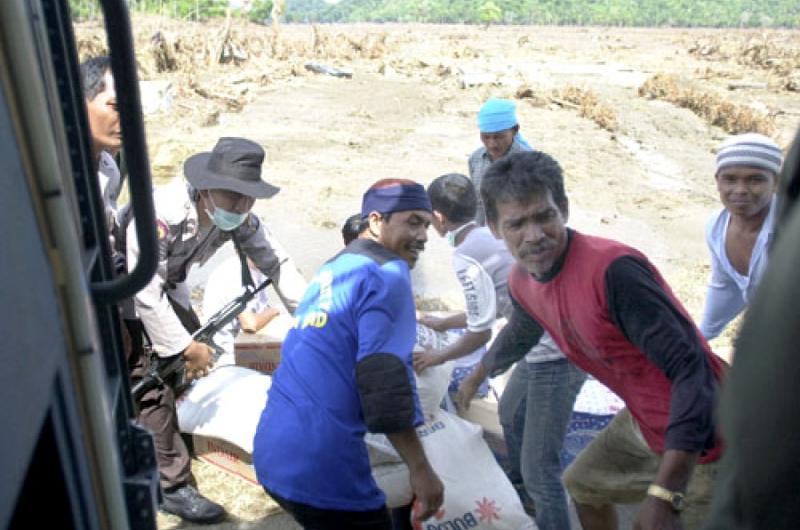 Indonesians hard hit by the tsunamis that leveled their town of Kueda Teunam help offload food and water from a Navy H-60 Seahawk from the USS Abraham Lincoln.

By Fred Zimmerman | Stars and Stripes

ABOARD THE USS ABRAHAM LINCOLN — Want some peace and quiet?

Stay away from the USS Lincoln flight deck.

Since the aircraft carrier arrived off Indonesia’s west coast Sunday, its 17 helicopters have flown nonstop, dawn-to-dusk relief missions to the tsunami-demolished area.

More than 100 missions are flown each day, according to Capt. Dave Lausman, the ship’s executive officer. And on each mission, each H-60 Seahawk has carried from 2,000 pounds to 2,500 pounds of food, water, milk and medical supplies.

Banda Aceh airport is the main supply distribution point. The helicopters, Navy officials said, have lifted off the carrier first thing in the morning, carrying sailors who make up their loading parties. The Seahawks have returned to the Lincoln only to refuel and change pilots and crewmembers, who fly together for up to four hours at a time, sometimes twice a day.

“I didn’t know it was going to be this big,” said Lt. j.g. Rachael Brainard, an H-60 pilot. “This isn’t our [typical military] mission at all but we’re trying to do the best we can with the resources we have.”

While the helicopters’ primary mission is to ferry supplies, Lausman said, almost every flight also carries injured victims back to Banda Aceh airport.

Brainard said she’s transported her share of the injured, the worst being a man with a severed foot and a woman with a badly mangled leg.

Monday, the first day Master Chief Petty Officer Joshua Dugan was coordinating ground efforts at the airport, he saw two injured girls flown in. “I’ve got four daughters myself,” Dugan said, “and the two girls were about the ages of my two youngest. They were pretty badly injured … that really got me.”

He said the girls were taken to a triage area on stretchers, then transported to a local hospital.

When he first flew into the region, Dugan said, he hardly could comprehend the damage. “That first flight was pretty overwhelming … there is complete devastation of towns. I thought I was mentally prepared … but it went beyond what I thought would be the worst possible case.

“It’s another example of Mother Nature humbling us.”

Before taking a 30-sailor volunteer team into the airport to work Tuesday and Wednesday, Dugan tried to prepare them by briefing them on what they were about to see. The volunteers work 10 hours to 12 hours each day, loading the “right aircraft with the right supplies,” he said.

Seaman Kimberly Kolar volunteered to go ashore to help because “I would hope the people would help us if we needed it.” She said she, too, initially was amazed at the destruction but loading supplies kept her mind off the surrounding devastation. The only time she became shaken, she said, was when she saw the carrier’s helicopters deliver injured people to the airport.

“The hard work is worth it … it’s not much, but it’s something,” she said. “You feel better when you get back.”

Brainard said the area was like “the Wild West” when she first arrived but the operation is starting to run more smoothly; “we’re realizing what we can do to make things better and we’re getting better organized.

“The greatest thing,” she said, “is seeing all the smiling faces.” Brainard said one of her most memorable moments was during a relief drop, when she climbed out of the helicopter to help unload. As she walked back to the aircraft to climb back in, an Indonesian man stood up and saluted her; another simply shook her hand.

Said Brainard: “I’ve never had more job satisfaction than what I have right now.”