A year in Vietnam, a lifetime of memories

A year in Vietnam, a lifetime of memories 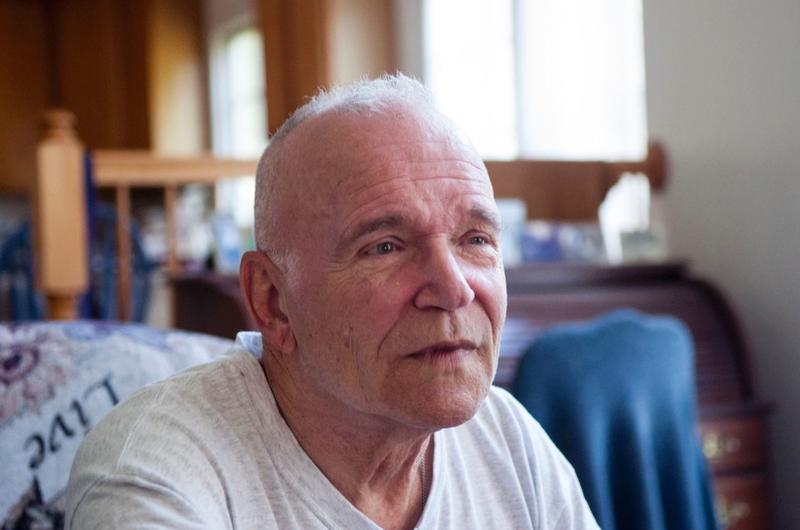 Marine veteran Joe Scholle tells of his days serving as a UH-34D helicopter pilot in Vietnam as he clicks through a photo slide show at his home in Severna Park, Md., on Sept. 30, 2014. Scholle said during the Vietnam war, fellow pilots were as likely to die from accidents as they were from direct enemy action.

Photo by Carlos Bongioanni / Stars and Stripes | BUY THIS PHOTO

SEVERNA PARK, Md. — Joe Scholle flew hundreds of sorties in Vietnam as a UH-34D helicopter pilot ferrying troops, logistics and medevac patients from base to base and in and out of “hot LZs” – landing zones under fire. While there for a year starting in October 1967, the Marine acquired the nickname “Crazy Joe” for the actions he took at his base at the start of the Tet Offensive. The nickname has stuck all these years, and so have the memories of many close encounters.

Scholle, 71, shared a few recently at his home.

A chopper through the trees

What was supposed to be a “milk run” ended up becoming Capt. Joe Scholle’s first medical evacuation in Vietnam. As the new guy with roughly a week under his belt, Scholle was flying co-pilot. The lead pilot, Jerry Norton, was to log in his very last flight before leaving Vietnam. They were to transport a passenger to another base and return to Marble Mountain Air Facility, where they were attached to Helicopter Marine Medium Squadron 363.

“It was a nothing kind of thing to do… a milk run,” Scholle said. “You know, you don’t want to get the guy killed on his last day.”

While heading back, they received a distress call from infantry troops who spotted their chopper overhead. They had a very badly wounded man on the ground. The last medevac helicopter just left, and another wouldn’t arrive for at least 30 minutes. “This guy really needs to get out of here,” they pleaded.

“Poor Jerry… talk about agony… on his face. … It’s his last day,” Scholle recalled. “There’s active shooting going on down there, and you could see that he wanted to say, ‘Well, wait for the medevac, we don’t have a corpsman,’ or something. But he couldn’t.”

So down they went.

They flew low and fast keeping the trees between them and enemy forces. At the designated spot, they popped over the trees and, because the wind was at their back, did a quick “buttonhook” maneuver thrusting the nose up and kicking the rudder hard left to turn the Seahorse copter 180 degrees around, essentially heading backward as they landed in a paddy field.

The “bad guys” were over the next row of trees in an adjacent field. That made getting out much more risky. Their helicopters didn’t accelerate very well at takeoff, Scholle said.

Wanting to reduce the chance of having their aircraft raked with enemy gunfire, Norton headed straight for the trees away from the enemy. He got about three-quarters of the way up and “no kidding, he chopped the tops off with his rotor blades and went right through the trees,” Scholle laughed as he recalled the episode.

They made it out safely, although the damaged rotor blades “talked” to the pilots about their mistreatment, making a loud “whishing” sound all the way back to the base. Mechanics had to reshape and rebalance the blades before the chopper could be used again.

Attending college in the early 1960s, Scholle, a native of Brooklyn, N.Y., was well aware that he would likely be drafted. At some point in his youth, he fancied himself becoming a Marine pilot after watching “Flying Leathernecks” starring John Wayne.

The question Scholle asked himself: “How do you get out of the draft, and do what you want to do?” The answer: He entered the Marine Corps' Platoon Leader Class program that placed him as a lance corporal and automatically took him out of the draft. During each of his last two years in college, he spent six summer weeks at Marine Corps Base Quantico, Va., attending Officer Candidate School. After graduating in 1965, Scholle, then 22, received his commission as a second lieutenant.

By the time he made it to Vietnam two years later, Scholle had developed a strong sense of camaraderie with his fellow pilots. Some had gone through flight school together. Those serving with him in Vietnam faced the same hardships and uncertainties of war, forging close bonds cemented with their shared experiences.

The pilots in Scholle’s squadron typically flew six days a week at all hours of the day and night. Crews on medevac duty never knew when a call to pick up casualties might come in. Aside from that stress, there was always the very real possibility of being shot down.

There were other dangers, too. Scholle said he lost as many friends from accidents as he did from enemy fire. One friend, Robert “Ike” Isaac Terry III, was copilot on a helicopter out in bad weather. They were flying very low to keep under the clouds when their Huey slammed into the side of Charlie Ridge, a hill just outside the main base at Da Nang.

“That was the end of a good friend of mine,” Scholle said. “I wasn’t very happy about it. ... But that’s the kind of thing that happened.”

“Stupidity” was another factor that got pilots killed, Scholle said. He recounted how a close buddy, Joe Cestare, was flying copilot on a gunship that was part of a formation escorting H-46 troop carriers. When an enemy anti-aircraft gun fired at the formation, most of the aircraft scattered to avoid getting hit. However, a major who was the lead pilot in charge of Cestare’s aircraft decided to engage.

Scholle wasn’t flying on that mission, but said other pilots who witnessed it told him how pieces of the Huey just flew off, and after the rotor blades stopped spinning, the aircraft plunged several hundred feet to the ground, killing all four aboard.

“So, Joe Cestare … St. John’s University… a New York City kid, like myself…” The thoughts came out in fragments as Scholle just shook his head at the senseless loss of another close friend. “Nobody takes on a 50-caliber with a Huey gunship. Not that. No, no, no.”

The making of ‘Crazy Joe’

It was late January 1968, just before the start of the Tet Offensive.

Everybody knew the North Vietnamese were about to launch a major offensive, Scholle said. “We just didn’t know the full extent of it.”

Scholle planned to capture the battle sounds on a reel-to-reel tape recorder. Ahead of the big event, he hooked up two microphones and hung them outside the windows of his hut. When the attack finally came, he and his roommates jumped out of their hooches and ran to the relative safety of sandbag bunkers.

Once there, Scholle realized he forgot to turn on his recording device. So as rockets and mortars rained down on the base, he ran back to his hut to hit the play/record button.

“Then I ran back to the bunkers,” Scholle recounted. “One of the senior captains, Joe Clark, says, ‘That’s one crazy Joe.’ And it stuck.”

On several occasions after leaving Vietnam, Scholle said he’d make a new acquaintance who, after hearing Scholle’s name, would ask in an awestruck voice, “Are you the Crazy Joe?”

“God only knows what stories people are telling about me. … I hope some of them are true.”

On May 22, 1968, Scholle directed the Seahorse he was piloting to a field near the demilitarized zone between North and South Vietnam to resupply troops engaged in heavy combat. Tall grass hid the troops so well that, not seeing anybody, he began to add power to his aircraft to abort the landing. As he did, voices shouted, “No, no, we’re here.”

Scholle hovered in the area and decided to do a “quick hard left rudder and come around again.” That’s when “all hell broke loose,” he said.

With bullet holes peppering the windshield and shrapnel spraying the side of his face and neck, Scholle was eager to leave. “I’m looking out the window. The crew chief is shoveling out ammunition. I’m like, ‘Hurry up, hurry up.’ ”

A slap on the leg from the crew chief below the pilot’s seat was the signal that the cargo had been offloaded, and Scholle got away as quickly as possible. Knowing his aircraft had taken many rounds, he looked at his instrument gauges to make sure the hydraulic systems were working. The gauges indicated everything was fine. What he didn’t realize was that an important electrical component had been damaged leaving the gauges frozen in place.

Once airborne, Scholle learned that his copilot was seriously wounded. One bullet came up through the floorboard and lodged in his big toe. Another came through the side of the aircraft, hitting his thigh and giving him a “big flesh wound.”

A bullet or piece of shrapnel had also severed a cord to Scholle’s helmet that provided communications in the aircraft. While the aircraft was heading to a medical facility at Dong Ha, the crew chief – unable to tell Scholle that at least one hydraulic system was shot out and that the second one was also likely damaged – tried to inform Scholle of the situation.

“We’re flying back… and all of a sudden, up from between my legs comes this big red hand… First thing you’re going to think is ‘blood…’ I’m thinking, ‘Casualties down in the belly.’ ”

He figured the strength he needed to fly the aircraft came from all the adrenaline pumping through his system.

For the courage he showed staying in the landing zone until all their cargo was off-loaded and for the skill he showed maneuvering the heavily damaged aircraft to safety, Scholle received a Distinguished Flying Cross.

But the experience unnerved him. Scholle said he shook the next three days every time he entered an aircraft. One way to overcome the fear of getting into the pilot’s seat again was to let the copilot fly, he said. He also smoked many cigars to calm his nerves.

On July 4, 1968, Scholle landed at a base that was supposed to be secure. “Everybody was standing up, waving, ‘Hi, how are you,’ ” recalled Scholle. They were carrying to the aircraft a patient who had stepped in a gopher hole and broken his leg

When he felt that, a frantic Scholle told himself, “Time to leave.” Again he flew a damaged helicopter with two wounded crewmembers to the same medical facility he had gone to six weeks earlier.

After that second close encounter, Scholle said he had a very difficult time flying again. On the first mission he was assigned after recuperating from his wound, Scholle said he started hyperventilating and nearly passed out. Passing the controls to a bewildered copilot who had just recently reported for duty in Vietnam, Scholle said he tucked his head between his legs and just rocked back and forth until he regained the courage to take the controls again.