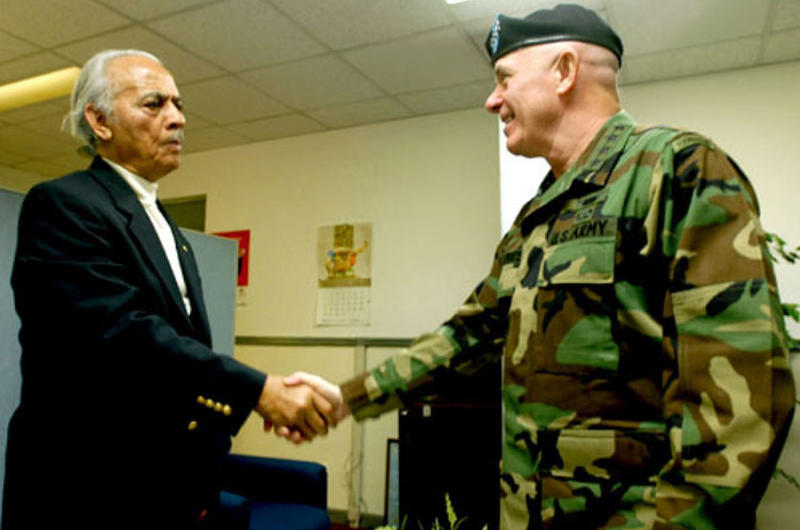 The decision meant the Tuskegee Airmen — an all-black group of pilots, who trained and fought together in World War II, in the skies over Europe — would no longer be assembled in one group but be dispersed among different Air Force units.

It meant the realization of a long-time goal — racial equality, at least in one segment of society — but also the end of an era.

“You see in my group, we had been together since 1942 for some six years,” said Carter, who, at 84 years old, looks two decades younger.

“There was that esprit de corps, that fellowship, that unity. Now we come to realize we were going to be shifted to the four winds. You were going to lose that camaraderie.”

By the end of World War II, the Army Air Corps had trained 992 black men at Tuskegee, Ala.

About half performed combat missions in Italy, with 150 men dying either in training or in combat as part of the 99th Fighter Squadron or the 332nd Fighter Group.

Composed of 60 percent black aviators and 40 percent white aviators, it operated from Suwon and Kimpo air bases in South Korea throughout the 1950-53 Korean War.

Carter is now active in speaking to schools on the accomplishments of the Tuskegee Airmen and ensuring their work is noted for posterity.

While in South Korea, Carter addressed servicemembers at Osan Air Base on Saturday for a Black History Month gala and spoke at schools.

Part of his work is to encourage minorites to consider aerospace careers. About 12 other Tuskegee Airmen also are still active in the awareness campaign, Carter said. Surprisingly, there are fewer minorities involved in military aviation than there were when the Tuskegee Airmen were active, he said.

The segregation policy of the military prior to 1948 actually made the Tuskegee Airmen stand out, Carter said.

“As we looked back then at the achievements and performance of the 332nd [Fighter Group], we felt that it had some impact on the decision to integrate,” Carter said.

“We realized that had we not been segregated, the record would not have been as evident and identifiable.”

For the military, having segregated units simply wasn’t efficient, Carter said. Further, it was dehumanizing.

“We Tuskegee Airmen say when our general officers evaluated the performance and the contribution of the Negro in World War II both in the air corps and in some of the integrated Army units, it became evident that pigmentation of the skin of the soldier or his creed or his religion really had no bearing whatsoever on his capability to perform,” Carter said.

Carter performed well with the 99th Fighter Squadron, flying 77 combat missions against the German and Italian air forces. The unit — along with the 332nd — destroyed 17 German aircraft over Anzio Beach during the Allied invasion of northern Italy.

He earned a bachelor’s degree from the Tuskegee Institute and a master’s degree in education.

Carter still calls Tuskegee home — and he says great strides have been made to stop racism; however, finer points of true integration — such as balanced schools and balanced economic opportunities — still need attention.

“We have not eliminated racism in America, and there are people just waiting for an opportunity to let it rear its ugly head again,” Carter said.

“Today it might be Muslims, tomorrow it might be anti-Semitic. You still have people who feel and think the African-American is inferior and not equal to them and should not be in public school with them.

“It isn’t dead,” he said. “It’s been reduced tremendously, but there is still much work to be done.”