41st PO — Down among sheltering palms

41st PO — Down among sheltering palms 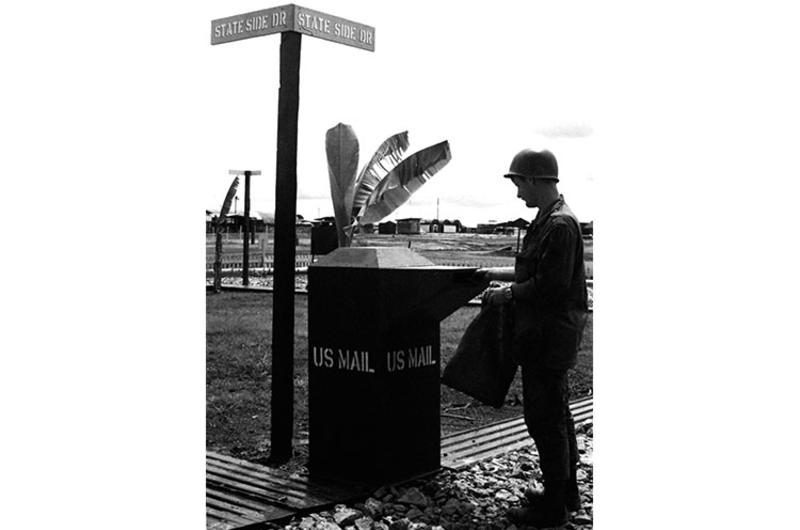 TAY NINH, Vietnam — The flat plain of Tay Ninh Base Camp, eight miles from the Cambodian border, might seem a strange place for a "Stateside" post office, but there one sits.

Lined by a yellow picket fence and palm trees, this postal unit is a colorful contrast to the other drab buildings of war spread through the often-hit camp.

The post office has a rock driveway rimmed with red metal sidewalks instead of the usual Vietnam mud, Parking lot street signs remind soldiers of home with names like Hollywood and Vine.

A red and white drive-in mail drop box stands in front of the buildings, just as they do in the States. A public address system plays music for stamp-buying patrons.

Even the mail truck has the familiar Stateside red, white and blue coloring.

If the post office is not exactly like those in the U.S., it is at least as close to the real thing as the 10 men from the 41st Army Postal Unit (Airmobile) ran make it.

They call their unit "the only Stateside post office in Vietnam."

"Mail is the main link with home for the soldiers," says 1st Lt. Frank Liptak, the commanding officer. "So we try to create a home-like atmosphere when they come to the post office. It's the best thing going for morale."

To achieve a Stateside postal effect, the unit's postal clerks attached plywood to the side of their mail truck, called the "Dear John Express." They painted the wood red, white and blue and printed "U.S. Mail" on top so the Army truck would resemble American mail vehicles. (The plywood can be taken down if the truck is needed for a tactical mission.)

"Soldiers barely notice normal Army green mail trucks," Liptak explains, "but when they see this one, it reminds them that someone is working to get their mail to them.

"They stop at crossroads to let our truck pass, saying, 'Don't slow down the mail.' Even if our truck were speeding, the MPs wouldn't stop it."

The 41st APU decided last May to cancel its old image and envelop its plain, uninspiring Quonset hut with a Stateside look.

"To reach the post office last spring, soldiers had to either wade water or slosh through mud, depending on the weather," Liptak said. "We decided to end all that."

Devoting slack and off-duty time, the men scrounged rock to fill in the mud hole and went out on patrol to dig palm trees.

By July 17 their efforts had attracted some attention. Brig. Gen. M. M. Jones, commanding general of the U.S. Army Support Command in Vietnam, came to see the "Stateside" APO for himself. His visit resulted in a commendation for the unit.

Despite the hometown post office look, some differences remain. Instead of the traditional pointing Uncle Sam who says "I Want You" in the lobby, the 41st has an Uncle Sam with closed fist in front of their post office. The Tay Ninh Uncle Sam is saying, "I Have You."

Wanted posters? Every office worth a one-cent stamp has the FBI's top 10. But the Tay Ninh unit has "wanted" GIs who forgot to fill out locator and change-of-address cards.

The resemblance to American post offices ends at the front window. On the sides five rows of sandbags are insurance for mall and men against the "special deliveries" the Viet Cong sometimes send into the camp

The unit also provides some strictly Vietnam services, such as money order salesmen who cover a 5,000 square mile area by helicopter during the pay period each month to make sure that men in the field have a way to send their money home.

But the 41st's main effort in the next couple of months will be the same as all other Army postal units overseas: Getting the barrage of Christmas mail to the GIs it serves.

Despite the expected daily flood of packages which Liptak predicts will keep his clerks from seeing the post office floor and maybe even the ceiling, the unit vows to continue what it calls "red carpet service," referring to the color and not the softness of its metal sidewalks.