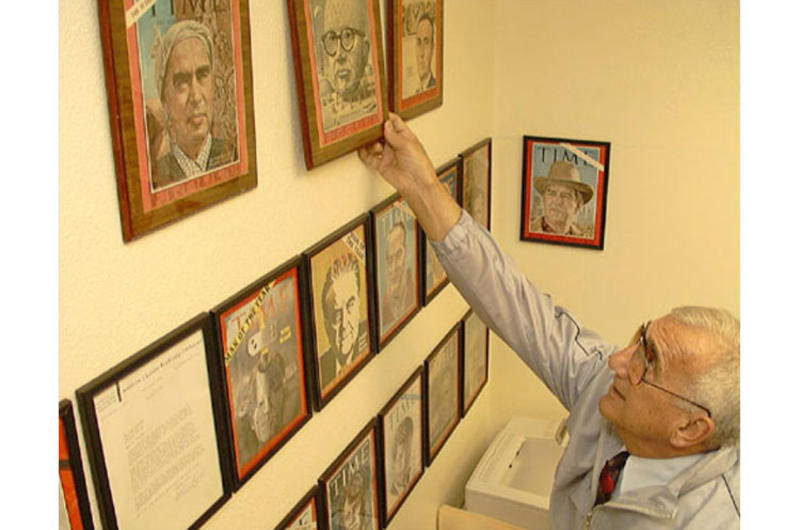 At Kadena Air Base, educator Greg Apkarian reaches for a picture frame that has a personalized autograph of architect Buckminster Fuller, featured on a 1964 Time magazine front cover.

By walking through Time.

Etched in ink across each magazine cover are the signatures of notables including Martin Luther King Jr., Bob Hope, Gerald Ford, Robert Kennedy and Ronald Reagan.

Although some of the items likely would generate brisk auction bidding among collectors, Apkarian said he’s not in it for the money.

In the 43 years he’s been a teacher and administrator for Department of Defense Dependent Schools, Apkarian, 72, has made a hobby out of getting autographs from those featured on Time.

“In all my years, I’ve always kept them displayed in my office, where kids can see the collection,” said Apkarian, principal at Okinawa’s Amelia Earhart Elementary School on Kadena.

Most children don’t realize the significance, said the principal, until he tells them to look more closely. When they spot the autographs, he said, they invariably ask, “ ‘Gee, how’d you meet all these people?’ ”

Apkarian said he typically sends off the magazine covers with letters explaining he’s a history buff collecting autographs of Time celebrities who have shaped history. In most cases, he said, he gets positive responses. A few times, he had to make repeated requests but said perseverance usually pays off.

Such was the case with former President Lyndon B. Johnson, recalled Apkarian. Several times Johnson’s office returned facsimiles but not an original signature on a Time photograph of the president with Vice President Hubert Humphrey. After getting a signature from Humphrey, Apkarian resent the Time photo cover to Johnson asking why the president couldn’t sign his name like the vice president did. It worked.

Apkarian said he has sent several requests to former President Bill Clinton but has yet to get that Time photo signed, although Clinton did send a signed presidential photograph. It joins other autographed photos of celebrities such as Walter Cronkite and dignitaries such as Ethiopia’s last emperor Haile Selassie, whom Apkarian met while serving as a DODDS principal in Addis Ababa in the early 1970s.

Getting the emperor to sign a photo took years of repeated requests. Of his entire collection of autographed memorabilia, Apkarian said, the Selassie photo likely has the most monetary value: Selassie had a reputation of not giving autographs.

But the items with the most emotional value, he said, came from Martin Luther King Jr.

King was the first to respond to Apkarian’s requests. The civil rights leader signed and returned a 1964 Time photo cover announcing his selection as Time’s Man of the Year and also enclosed a “very nice letter,” which also hangs on Apkarian’s office wall.

When someone of such stature takes the time to write back, Apkarian said, “It says the person I’m writing to is human and doesn’t think of himself as above the rest of us.”

The educator, who will retire at the end of the school year and take his collection with him to Florida, said he’s encouraged to see how his hobby has motivated others. He said former students have told him they’re now seeking and receiving autographs from those who make the covers of today’s publications.

Apkarian began his DODDS career in 1960 in France and spent most of the next 25 years at DODDS schools in Germany, Italy and Ethiopia. He’s been at Kadena since 1985.